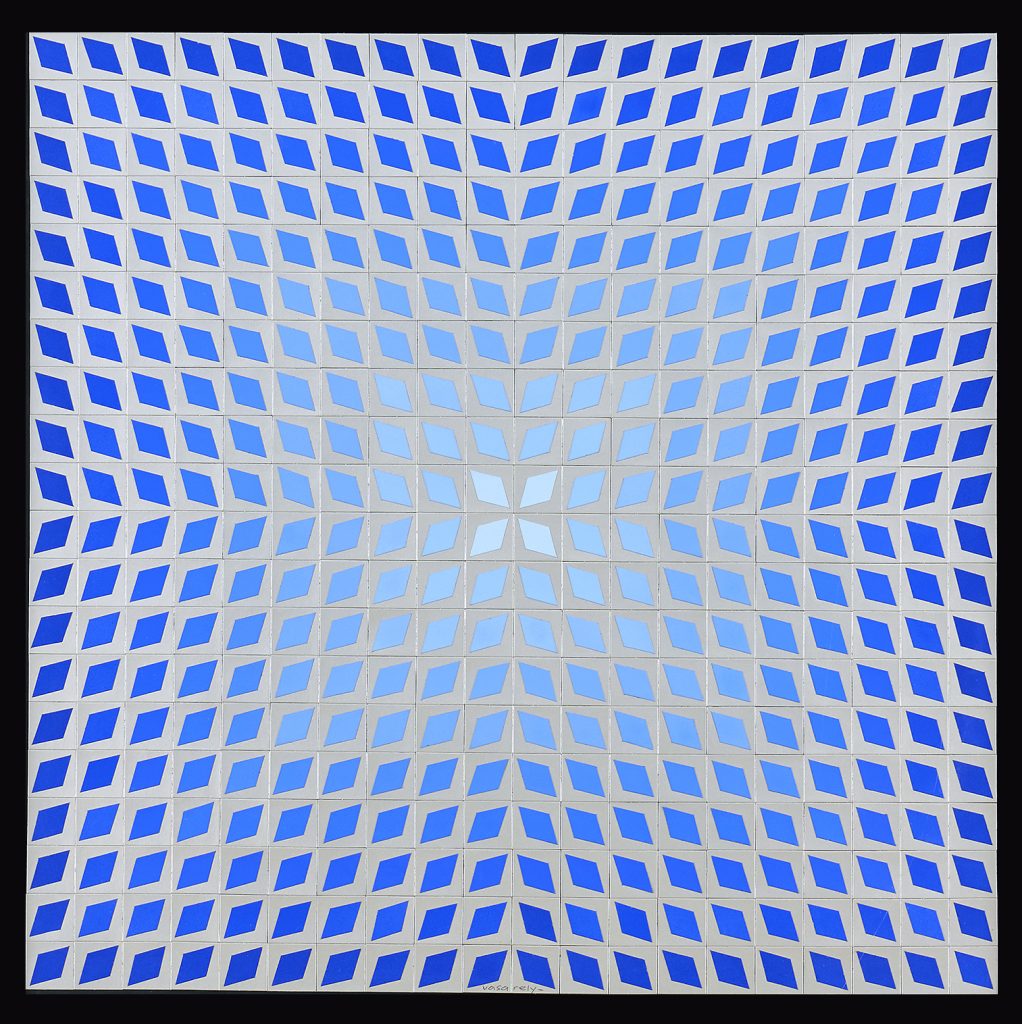 The Hungarian born Victor Vasarely became famous during his lifetime through his ability to distinguish himself from contemporary art with the creation of a new movement called optical art. Unlike many other artists, Vasarely did not know that he was to become one. Throughout his early life, he found himself more drawn towards the sciences than the arts; an interest that encouraged him to apply for the University of Budapest’s School of Medicine where he studied for two years. The formal scientific training provided him with a strong sense of scientific method and objectivity. When he made his life-changing decision to pursue a career in art instead of medicine a few years later, he was probably not aware of that his first years of studies would prove to be very useful even within his artistry. His further studies at Muhely, known as the Bauhaus of Budapest, led him to discover constructivism and abstract art. Artists like Wassily Kandinsky, Paul Klee and Walter Gropius became important role models for the young Vasarely as they introduced him to the formal and geometrical style of art. A theory that the sciences had reached the limits of what could be explained began to take form, and the answer according to Vasarely was to combine science with art so that the scientific models could be visually comprehensible.

Like many other artists, Vasarely eventually moved to Paris. His artwork from this early period is very graphical and laid the foundation for his further development towards a more optical form of art. He brought together objects of varying size and scale with richly coloured backgrounds of rhomboids, and experimented with the checked design. The instant pattern and the appearance of depth despite the absence of a subject introduced Vasarely to the vibrating effect of combining geometrical patterns. This revelation had a significant impact on his artistry and can be considered to be a precursor to his later optical art. He made his first paintings in the 1940’s, first in black and white and later in colour. They presented geometric abstractions that evolved into an optical phenomenon, a development from his graphic period that was very successful. The movement from paintings that evolved from representational images to abstract works composed entirely of geometric shapes occurred only a few years later.

Soon he began to support ideas of art as something less individualistic and more collective, a theory that would follow him throughout his career. For the artist himself it was of great importance that the art he produced could be mass produced and affordable for everyone. In this way, he believed that the art would benefit all of society. The invention of the Plastic Alphabet, built on the idea of a universal language understandable by all, previously introduced by abstract artists earlier in the century, in the 1960’s changed the former perception of art as a subjective matter. In the artists own words he combined “two geometric elements that fit one into the other, that come together, that switch places” and together with the contrasting colours, the artist was able to make illusions appear. During this period he further developed his sense of perspective, shape, material and lines and was even then widely honored by his work in the Op Art style.

Many of the series of paintings that were introduced in the 1960’s and 1970’s were used even in his later career, combining different colours and geometrical designs. Presented in the sale is 400, a collage created by Vasarely in the late 1960’s. The work is constructed by small pieces of colored paper, together building a composition that immediately creates movement and drags the viewer to the image. Vasarely makes use of variations in colour to further the illusion of movement and structure, a method that provides the viewer with the feeling of depth, energy and movement.

Vasarely is represented in numerous important museums around the world today, not least in the Foundation Vasarely that was established in 1966 by the artist himself.